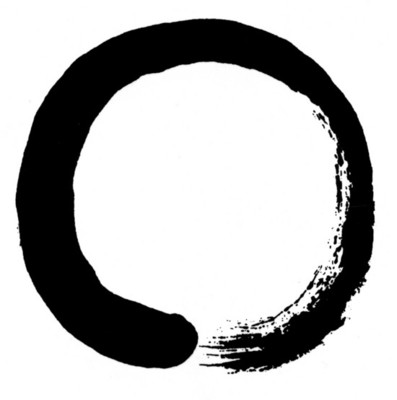 Or you know, sometimes we feel lost because we’ve ended up some place too familiar.

It rolls, it rolls… so even though it’s the same circle, we find that it’s taken us to different places…. in a strange way, as a circle comes upon itself, it finds itself no longer the same, changed in all the ways that make a day distinct.

Last night (Wednesday), Hades, Kazuma and I went to his place to have some homestyle Korean BBQ.  With a few perks. 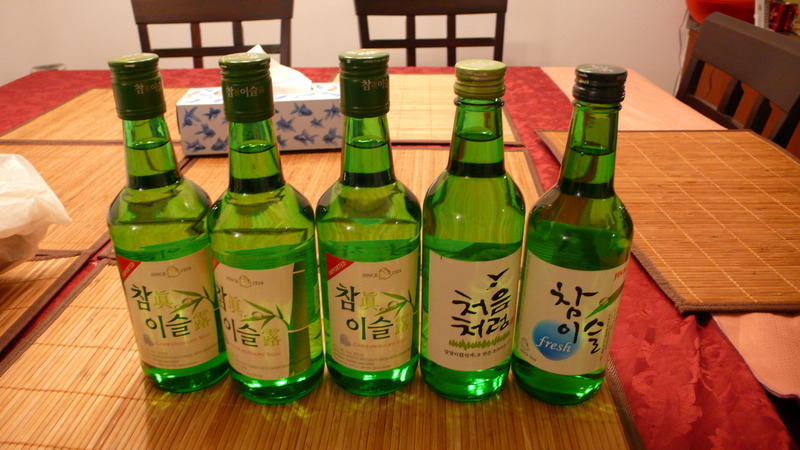 Expensive perks, mind you– but whatever, once in a while ain’t so bad.  Soju is special to me: it reminds me of my second home in Korea.  I associate it with all the 3AM noraebang sessions, the beaches of Daechon and some of the best humans I’d ever come to meet.  The company in Canada adds to this tradition. 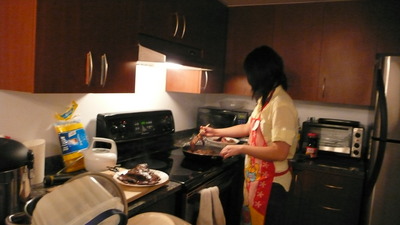 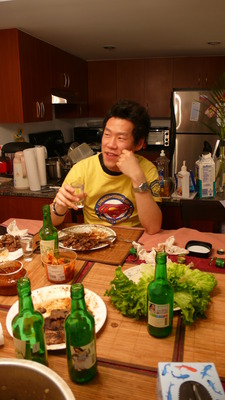 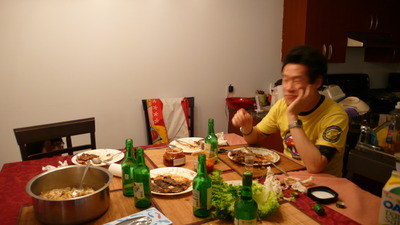 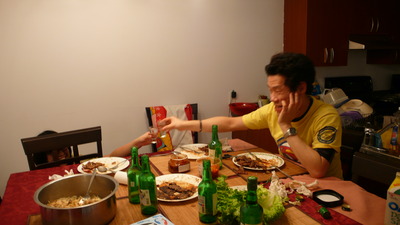 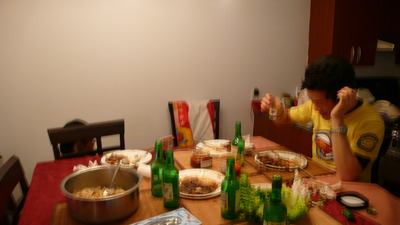 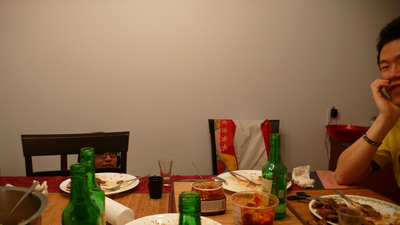 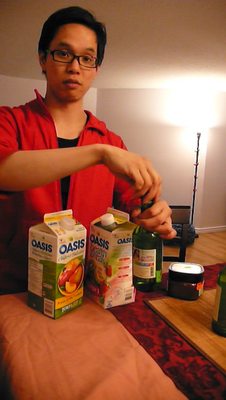 “Whattt? Fruit juice with soju? But that’s a ladies drink!” 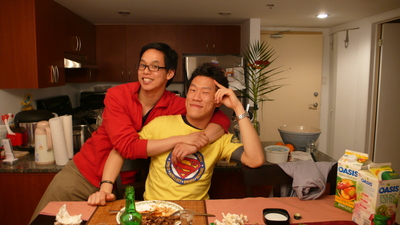 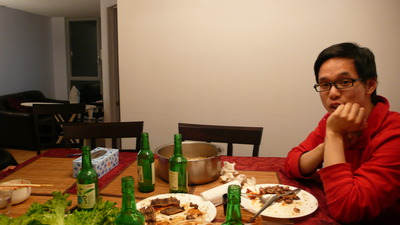 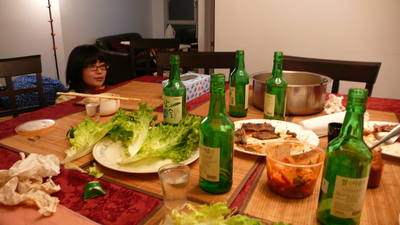 For some reason, most of Hades’ pictures have her trolling around under the table.

I’d say more about the event I don’t feel I have to, I think the pictures describe the mood pretty well.

These are my grandparents and my aunt with my new cousins.  The picture is actually from Christmas, but, seeing as I forgot my camera at a relative’s house and only now got it back (almost a month later) I’m only now seeing these pictures. 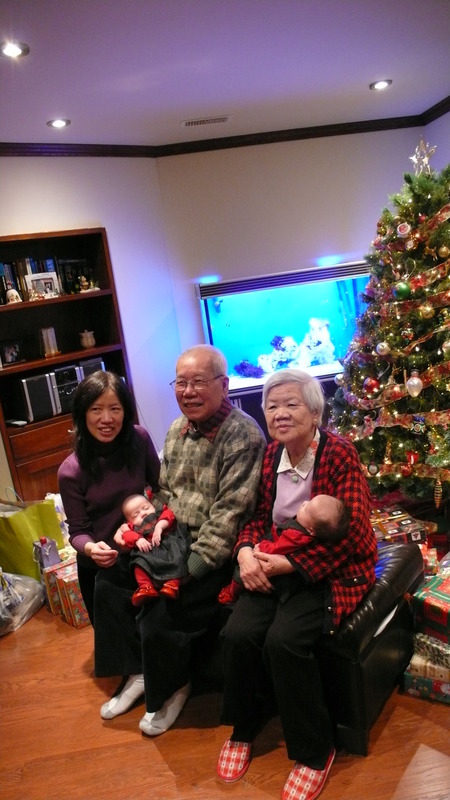 My new cousins are very tiny.

I don’t remember, but I imagine this might’ve been how things looked when my sister and I were babies as well.

So, for the last two weeks that I’ve been talking about training at the new hospital job, I’ve been training for two roles– the day DRec and ERec positions (“day reception” and “evening reception”).  Today I began working on DCore (“day coordinator”).   I can say without a doubt that so far, the coordinator role on the emergency floor is awesome.

No pictures for this kinda stuff, unfortunately.  But as far as DRec and ERec go, it’s not that they’re any less involved in the action than the Coordinator– however, the people you deal with are different.  The Rec positions involve you working almost excluscively with doctors, nurses, PCAs, technical staff and laboratories– you don’t actually have any contact with patients or patients’ families except over the phone, and even then, it’s mostly because they’re wasting their time trying to ask you “is the ER busy?  Do you think I should come in today?”

Which, might I add, is a useless question– if your kid has a problem, you have to bite the bullet.  Knowing what kind of bullet it is doesn’t really change anything, and to be honest, nobody knows how long it will be before your kid gets seen: we operate on a triage system where it’s not first come first served– the sickest get to cut in line.  If you’re being a bit paranoid because your kid’s got a little cough, you’re likely to be waiting for 7 hours or more just because you’re a “Category 5” patient and your problem isn’t nearly as threatening as you think it is.  You’re honestly better off just going to a clinic.

The Coordinator’s job, in any case, deals directly with patients.  With a limited number of rooms and doctors, someone has to get things rolling– the Coordinator’s job is essentially like playing a game of Starcraft.  It’s real-time-strategy.  There are hospital units (doctors, nurses and other staff) that you need to deploy so that their strengths and weaknesses match the situation.  There are objectives (patients, and their families) that need to be handled in specific ways.  They sort of like “enemy units” in the sense that each patient and each family provides a unique medical or surgical problem that needs to be addressed with a certain one of your units.  They are triaged into one of five categories, and that’s basically a threat assement by the triage department to give you a heads up of how to use your units.

So once you know what resources you have availble to you, and what the invaders are like (in general), you go into the fog-of-war, which is all that stuff that doesn’t show up on the paper.  You never really know what kind of parent you’ll be running into, frankly.

Terrain plays a role too– some observation rooms are differently equiped from others.  Some rooms have negative pressure and isolation enhancements.  The psychiatric room has nothing that can be used as a weapon.  Some rooms are communal, some are more private.  Some are primarily medical, others are primarily surgical (although in a pinch, either can be retrofitted to do the other’s job).  Treatment rooms are decked out with equipment.  The Cast Room also has it’s special features.  And then there’s the Crash Room, which I’ve started personally calling the “Chop Shop” because after a lot of screaming and/or crying usually people come out of there looking quite traumatized.

Because the Rec job was 99% a sit down job, it’s nice to try the Coordinator position now because it’s about 80% running around.  I get crazy mileage as a coordinator, and I also get to be involved in the activities of the treatment room and the chop shop.

What I find is the main plus is that as a Coord, I have to interact with the patients and their parents directly.  My French ain’t all that great, but it’s passable.  The main challenge of it all is talking to parents and children.  Smiles are very important.  And I don’t just mean, smile at them– but you have to figure out some way to make THEM smile.  This means aside from the actual deployment of units relative to the conditions of the terrain and the specific nature of the invading force, like any good RTS there is always the micromanagement that you must do to get added-value for your time.  That means offering a family an ice pack if their 10 year old has a lump the size of a tangerine on his forehead, or turning out the lights in a room if this other kid has killer migrines.  Technically, there is no procedure in the books to do these sorts of things– however, a little investment in this area goes a long way to preventing, or at least staving off, the evolution of a concerned parent into a hostile one.

I find it interesting to say this, but the child is generally not the problem.  You could think your kid is the most sick little angle in the world, and on a scale of 1 to 5, you get triaged into a 4 or a 5, which in many ways sorta means “what? 6 hour wait? come on, suck it up!” And you know what? Kids are very tough, they’re much tougher than their parents give them credit for.  But of course, wanting the world on a platter for their children?  If I didn’t want that, I might be a resonable person but I wouldn’t be a very good parent.

Love trumps reason.  Would you have it any other way?

I really like how getting hired here essentially isn’t me getting hired for a singular job, but four positions at once that are all closely related.  Technically I’d only be working one position per shift, but because of the close connection of the four positions, regardless of whether or not you specialize or ultimately only work one of the roles, you still need an intimate, inside-out understanding of the other three roles in order for the emergency admin team to effectively work as a unit. Yarrrrrg.  I must wake up in about 6 hours to go BACK to work.  The work is good, but waking up always will suck.

Things have been going pretty well, well, as far as things that I’ve been working on.  I haven’t, for example, paid much attention to dating in quite a while now.  In part though I’m rationalizing that that’d be too complicated given that as it is I hardly have time to do anything with my messed up sleep schedule.

No problem– I’m ready to roll.  See y’all on the flipside.

As a general note,

when i was a kid, and I had nothing to do, I’d call the “Hooked on Phonics” program just to see if it was REALLY free on all payphones.

Let my first note be that Hades can drink a whole lot more alochol (apparently) than ame without apparently suffering the same effects as me.

Kazuma and Hades for the most part seem like awesome people in that they just… well, they’re fun to be around.  Blame it on me working 7 days in a row to arrive at this concolusionj (if only because I skipped a day of work), but regardless of the fact that I’ve been working a week nonstop they are good people.

Hmm… well if this were nothing but a rant at the wee hours of the new dawy, this really woouldn’t be anything significant.

But seing as as I have as much to say as I am… shall I say this:

At the end of a day, or whatever, before you go to bed:

It all comes down to experiences.  This is what our lifes are com[[psed of.

It’s all the things that makes us happy and sad.  All the parts of our pasts, presents and futures, but not just in isolation of the people around you, but everyone and everything that make up the world in relation to you.

It’s, in the end, all about you: the world ends with you, and if that means for a moment, you can find people and you can find a good time, what else is there to it?

We don’t exist in isolation, and for every moment that we ever felt lonely, it’s only because we didn’t really take the time to invite someone to have some dinner with us.

wHEN asked the queastion, i wouldn’t say I’m a happy or sad drunk… I’m just a very ‘honest’ drunk in the sense that i tend to jiust say what’s on my miond. er… mind.

For tomorrow, let me say this then:
the world is full of beautiful people and regardkless of whether or not they believe in themselves, I believe in them, and most beautiful peopld on’t even realize it.  That they are, beutiful, en effet.  They don’t know it, but I’m a good judge of character I think so take my word for it!

I have to be in the Emergemcy room in about 6.2 hours, so I should probably sober up.  i aqm writing this mostly because I belicve in truth, so,m despite my less that stellar condition, I’m going to just put a few notes in here that I’ll be able to see on the morrow.

Don’t let anythign pass you by.

Embarssments, regretts, whatever– they are all experiences, they makey ou who you are, and they are what tiey ou to humanithy– before you fall asleep, think about the people who made you feel human in the simplest of ways that they probably don’t even realize, and then do that– make a conscious effort to be a person, interacting, feeling, loving or hating or whatever– and that, ladies and gentlemen,

that at the end of the day makes everything worth it.